“Ben Graham's Net Current Asset Values: A Performance Update” by Henry R. Oppenheimer was published in the Financial Analysts Journal, Vol. 42, No. 6 (Nov. - Dec., 1986). The study examined the performance of securities that were trading at no more than two-thirds of their “net current asset value (NAV)” during the 13 year period from 1970-82 period in the US.

Our objective was to analyze the study itself; determine its reliability, draw our own conclusions and glean, if any, actionable advice for the practitioner of the “net net” method of investing.

Please note, the terms “NAV” and “net nets” are used interchangeably throughout the analysis.

“…sum of all liabilities and preferred stock and subtracted it from current assets; this result was then divided by the number of common shares outstanding to give NAV.”

While there are numerous biases/errors that can be made when conducting studies/back tests, below we have analysed those we deem most likely to impact a study of this nature:

Given the use of “random” samples and the Security Owner’s Guide (as opposed to a large computerized data base that might not include delisted stocks) the data source appears to be free from “survivorship bias”.

“Our investor bought a security if its November closing price was no more than two-thirds of its NAV… the date of purchase, the last business day of December of each year.”

Given the lag between when the “NAV” was calculated and the “date of purchase” this study does not appear to suffer from “look ahead” bias.

Furthermore, given the data was retrieved from a physical manual, logically, “look ahead” bias could not have occurred.

The study spans 13 years and we classify this as a “somewhat reliable” period.

Given this study was created in a rather manual and laborious manner we think it prudent to assume some errors may have occurred.

Appearing in the Financial Analysts Journal adds credibility to the study in light of its reputation.

Reliability Assessment: Based on the above and considering the clarity with which the methodology was explained the study appears to be reliable. However, following further analysis (refer below), we conclude that a number of findings in the study may not be as reliable as they initially appear.

Table IV from the study is reproduced below: 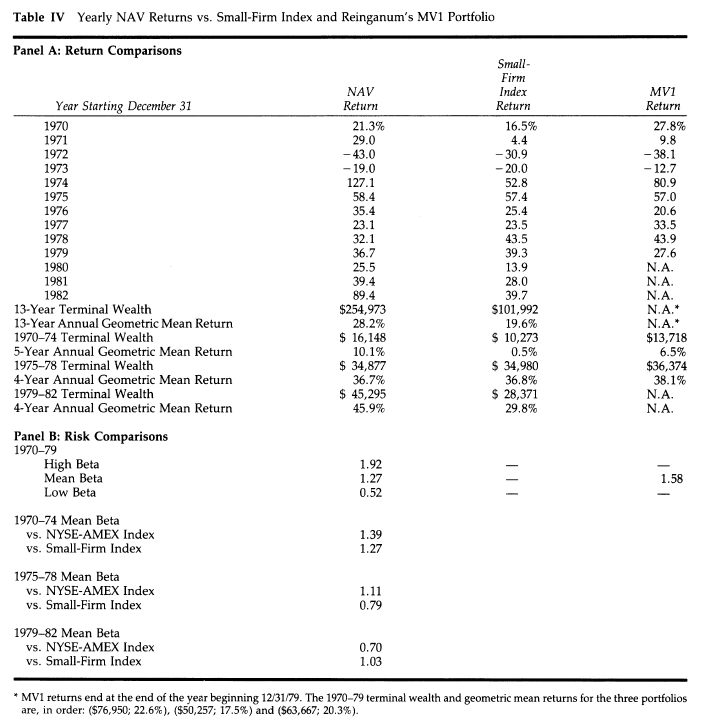 Below we have adapted the data from Table IV and looked at the performance in both absolute and relative terms to the S&P 500 Total Return (TR, i.e. including dividends): 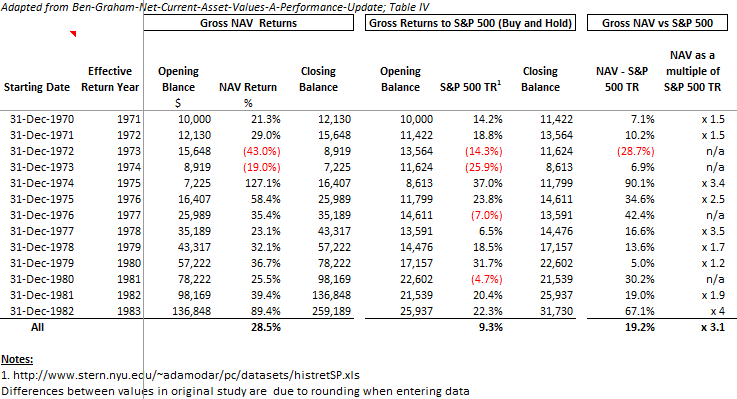 However, as Yogi Berra is claimed to have said, "In theory there is no difference between theory and practice. In practice there is."[ii]

Consequently, we simulated reality by adding commissions and taxes. We included commissions of 5% (2.5% to buy 2.5% to sell)[iii]. In relation to taxes, we utilised the capital gains taxes rates of the corresponding years[iv] in the study. We assumed our hypothetical investor resided in the US and sat in the highest marginal tax bracket but held on long enough to be eligible for the long-term capital gains tax rates. In contrast we assumed an investor in the S&P 500 bought and held, never realizing their gains (and for simplicity we did not adjust their dividends for tax).

In addition to commissions and taxes we also examined the impact of inflation[v], which was rampant during the period to ascertain its impact on returns.

Table VI from the study is reproduced below: 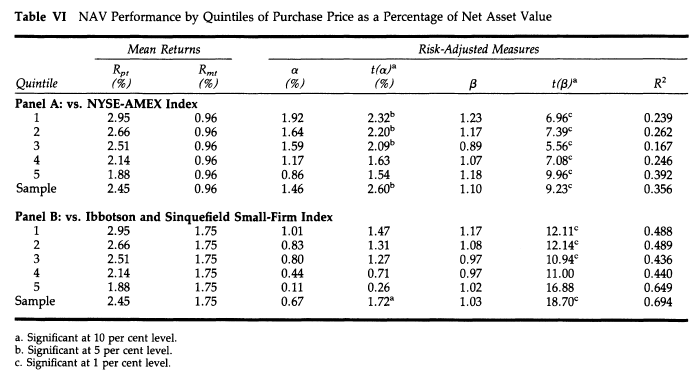 With regard to Table VI the author states; “The conclusion is clear-cut. Returns and excess returns can be rank-ordered, with securities having the smallest purchase price as a percentage of net asset value having the largest returns. It appears that degree of undervaluation is important…”

Notwithstanding the above, due to concerns over the data used to measure returns (which is discussed in detail in subsequent sections), based on this study alone (and not taking into account our wider body of knowledge), the conclusion “that the degree of undervaluation is important” is not as reliable as it initially appears (despite its likely accuracy).

Table V from the study is reproduced below: 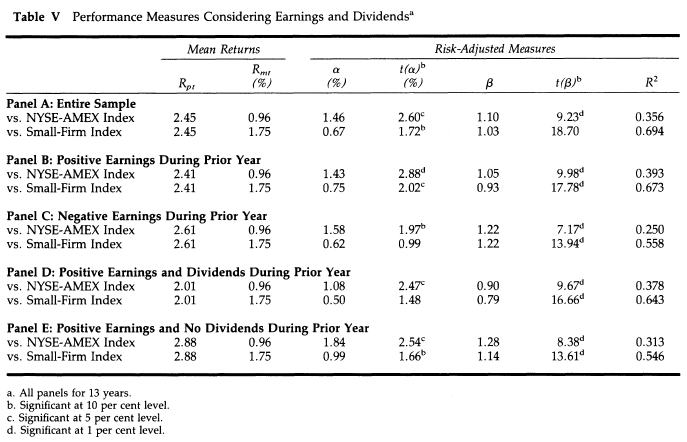 It would appear then, that dividends, at least in relation to the period and market studied were a hindrance to returns…or were they?

“all comparisons with the exchange benchmarks returns without dividends are used for both the security return and the benchmark return.”

For clarity we will demonstrate using an example between a non-dividend and dividend paying stock:

From the table above Stock B (the “dividend payer”) has produced the higher “total return” (i.e. 50% vs 30%), however, if you exclude the dividend Stock A (the “non-dividend payer”) appears to have produced the larger return (i.e. 30% vs 20%). While perplexing, it does, to our comprehension, appear as though this rudimentary error (i.e. excluding dividends) has been made in conducting this study[vi].

In light of the above, we are of the opinion that no reliable conclusion can be drawn in relation to the impact of dividends on the return to “net nets” based on this study.

The author sees the differential between “Positive Earnings” (Panel B) and “Negative Earnings” (Panel C) as marginal. The author concludes that “No clear-cut pattern emerges from an examination of these panels. If anything, firms operating at a loss seem to have slightly higher returns and risk than firms with positive earnings.”

However, in light of our findings with regard to the data used to measure returns (discussed in depth in the section titled “Dividends”) we deviate from the author’s assessment in relation to “positive” and “negative” earning net nets. We agree that “No clear-cut pattern emerges from an examination”; but do so for different reasons.

It is possible (probable in our view) that “positive earners” had a greater propensity to pay dividends. Therefore, if those dividends were not included in the measurement of their returns they would be artificially reduced. Of course, it is also possible (albeit unlikely in our view) that “negative earners” paid the greater share of dividends subsequently understating their returns. Irrespective, we are of the opinion that no reliable conclusion can be drawn in relation to the impact of earnings on the return of “net nets” based on this study.

Table III is reproduced below: 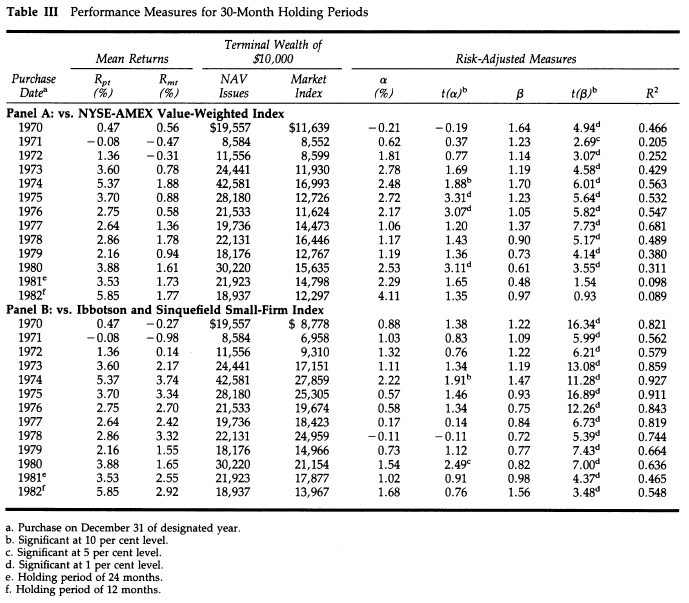 While it would have been interesting to analyze the returns for portfolios held for 12 and 30 months this is not possible as the annual returns to the 12 month holding/rebalance period per Table IV are geometric means, whereas the returns displayed in Table III above are arithmetic means. However, the author’s commentary does specify that “The results largely parallel those of Table II” [which displays the monthly arithmetic mean for a 12 month holding/rebalance period]. From a return (and wealth) perspective, the advantage of the NAV portfolios over the market indexes is consistently pronounced.”

In light of the foregoing it is highly probable that a considerable number of firms included in the study were, in effect, uninvestable. Consequently, the reported returns are highly likely to have been materially biased upwards given the findings reported in other research pertaining to the very smallest stocks within a market and their associated lack of liquidity[vii].

One noteworthy comment that stands out from the study is as follows: “Even though the NAV criterion is the valuation technique Graham is most famous for, it has been subject to relatively little research.' Oppenheimer has provided tests of its performance over the 1949-72 period, but his tests (which do not demonstrate consistent profits) are largely confined to data prior to 1958.” (p. 40)

Interesting; unfortunately to date we have not found these other “tests”.

“Ben Graham's Net Current Asset Values: A Performance Update” examined the performance of securities that were trading at no more than two-thirds of their “net current asset value (NAV)” during the 13 year period from 1970-82 period in the US. The study reported gross returns that were more than triple the returns of the S&P 500 TR. Our simulation determined that the aforementioned returns, on a net basis (i.e. after commissions and potential taxes) would have nearly doubled those generated by the S&P500 TR.

However, the study utilised data that excluded dividends (i.e. “price return” data as opposed to “total return” data) and therefore the conclusion reached in the study, “[c]hoosing only firms that have…. a dividend does not help the investor” does not appear to be reliable. Furthermore, as data excluding dividends was also used to measure the returns of “positive” and “negative” earning net nets, no reliable conclusion can be reached in relation to the impact of earnings on the return of net nets either[viii]. Critically, it is highly probable that the study included a considerable number of firms whose securities may have been too illiquid to actually trade. Moreover, the inclusion of such firms is highly likely to have biased the reported returns upwards.

While the study initially appeared to be reliable, in reality it suffered from a number of material flaws such that it is highly improbable that the reported returns could have been achieved by an investor in practice.

[ii] The quote, “in theory there is no difference between theory and practice, while in practice there is” is more likely to have been stated by Benjamin Brewster.

We assumed our investor was in the highest tax bracket.

[vi] While we attempted to contact Mr. Oppenheimer to attain clarification on the matter, unfortunately, he appears to have retired in 2016. (https://web.uri.edu/business/2016/02/10/professor-oppenheimer/)

[viii] In and of itself the exclusion of dividends would have understated the reported returns.

The original version of this article was also published by Alpha Architect here.

Examining Greenblatt’s “How the small investor can beat the market”